A Response to Joshua Foust's Piece, "Why the European Right Can't Be Blamed for the Attacks in Norway", in The Atlantic

One is not surprised to see such a "balanced" apologia for Western prejudice against Muslims written from a person who has ties with USAID. Breivik's acts mirror what US/NATO policies do daily in Muslim countries. Afghanistan, Pakistan, Afghanistan, Yemen, Iraq, Libya and Somalia are bombed and subject to internal operations, support of tyrannies, torture, wholesale murder of any who resist occupation, armed, funded and sometimes practiced by Western Intel agencies. Also the US is largely responsible for planting the seeds of Fundamentalism in many areas by funding and arming Wahabbi groups and destabilizing regions to weaken states to secure hegemony over resources(Afghanistan, former Yugoslavia, Libya,Yemen and Somalia). Does Mr. Foust really think Al Qaeda is not an arm of Western Policy to deligitimize Muslim resistance to Western Resource colonialism? If you look at all the trouble spots in Africa and Asia you'll see two common elements: US/NATO Military presence and Intel Agencies alongside Al Qaeda. The surest sign US/NATO is losing in a region is the disappearance of Al Qaeda. In Afghanistan we are now fighting a Pashtun insurgency. Our patsies have gone. We supported Al Qaeda in Kosovo and Bosnia and we are now supporting them in Libya. The War on Terror is a propaganda bonanza aided and abetted by US NGO's who publish studies and promote the "humanitarian" side of Western Colonialism.

Breivik's insanity is matched by the calculated Islamophobic practice of Western policy. The US, along with NATO, is now bombing 6 nations that "happen" to be Muslim, with a huge military presence throughout NE Africa and West Asia. Is this accidental? Every month drone bombs slaughter civilians in these nations. Breivik's act is no more acceptable than Western aggression. His desire for attention for his greater aims are no more psychotic than Western NGO's analysis of why US/NATO's efforts just need to be fine tuned to work better for the colonized. Mr. Foust himself is an ideological psychotic who fronts the world's largest murder machine and often wrings his hands at the "policy mistakes" it makes. He always argues for a more intelligent and "balanced" colonialism. You'll never see him argue that US/NATO's intervention in these regions is aggressively looting resources and terrorizing people under the rubric of "security".

It's nice to see Joshua Foust defend McCants and other Intel parasites who live off the terror US/NATO inflicts on the people of many nations. Bogus Jihadi groups are infiltrated and guided by Western Intel agencies to provide timely alarm for US Populations as an argument for our growing military expenditures, enhanced security state measures and greater belligerence. Breivik's fears of Muslims are largely driven by Western States consistently warning their people about Islamic Terrorism as they bomb and occupy several Muslim nations.

In the Europe of Le Pen and growing Right Wing Nativism Breivik is not an anomaly. He is the face of Western Aggression towards Islamic nations turned against itself. But Foust grazes over the obvious terror practiced by US/NATO and sheds crocodile tears for his friends in the "Terror Analysis" business. They, like him, live off the terrorism US/NATO nations inflict daily against groups they funded and armed to further colonial aims. It's a good business to get in for people who like to think about how best we can humanely colonize people who resist our resource looting.

Mr. Foust needs to look inwards and examine the psychosis and corruption inherent in his own analysis before he bemoans US/NATO backing drug dealers(Afghanistan), black market human organ dealers(Kosovo), arms dealers and mercenaries. Colonialism can't have humanitarian aims. It can hire NGO's to trumpet its efforts to be more humane. They are promotional hacks attached like barnacles to the terror.

Joshua Foust is a paid ideological courtesan who fervently desires Western Resource Colonialism in East Africa and Asia becomes a kinder, gentler endeavor. He serves what he, in his ardent heart, at times finds abhorrent. I feel sad for the ethical gymnastics his mind must undergo to analyze the looting and mass murder of peoples all in the name of grandiose policies. He wishes to refine terror and oppression of peoples into something humane. Like our Humanitarian effort in Libya--which he, to be fair, is severely critical of. When the bombs stop falling and Gaddafi steps down(who knows?) he might leave his beloved Central Asia(Registan) and start opining on how the West can best serve Libyans. Apply, Rinse, Repeat ad infinitum.
Posted by Anatole David at 10:00 AM No comments: 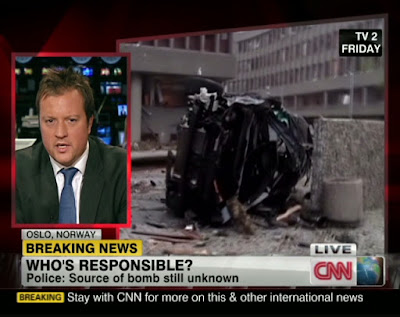 Cable News anchors and invited "terrorism experts" couldn't hesitate to ascribe the bombing and shootings in Norway to Jihadists or Al Qaeda. They cited the level of sophistication and bemoaned Norway's "open society". Another lament, Norway is a peaceful nation unjustly attacked by the madness of "terrorism". Even "prestigious" American publications like the New York Times ran with headlines announcing Jihadist terrorist attacks in Norway. They even reported on a bogus admission of responsibility by a "terrorist" outfit.


The "experts" were convinced Islamic Terrorists were responsible because of the sophistication and scope of the attack. Their analysis concluded it had to be a Jihadi or Al Qaeda operation. Discussions about cartoons depicting Mahomet were given as possible reasons for the "attack". The aerial bombing of Libya by Norway's Air Force was not discussed. Norway's participation in Afghanistan as occupiers didn't garner a peep. Those inconvenient facts did not harmonize with the narrative of a peaceful Norway being unfairly targeted by insane Islamic terrorists.

Within hours of the bomb blast and shooting "experts" had already decided that Islamic terrorists were behind it. They had already depicted Norway as an innocent victim of Jihadi or Al Qaeda barbarians. Does this sound familiar? Their excitement to ascribe blame to those we terrorize daily with remote drone and manned aircraft bombings, invasion, and occupation is not accidental.

It's necessary to inoculate hints of blowback from our terror campaigns elsewhere by falsely stating attacks target "innocent victims". Recall that aerial bombings and drone strikes by the United State and NATO kill many times more civilians than all "terrorist" strikes combined.


A propaganda effort by Western Media went to waste. Only one man has been arrested in the attacks. He admitted to the bombings, was captured at the Labor Party Camp, and identitified as the shooter. A Norwegian man who had a history of writing Anti-Islamic screeds and affiliation with rightwing groups appears to be responsible.

The Western Media has moved on from irresponsibly applying blame to ostentatious grieving. Of course the white Norwegian male charged with the murder of 92 people is not called a "terrorist". When Europeans or US/NATO military operations mass murder civilians it is strategic action striking "terrorist operatives" or, when done by a civilian, the act of a crazed loner.

It's idiomatic. Western mass murderers are heroes or crazed loners. When Muslims resist occupation and the mass murder of their fellow civilians they are evil "terrorists".

Posted by Anatole David at 9:49 AM No comments:

Mysteries so deep
outlive the bloom
in blush's rebirth. 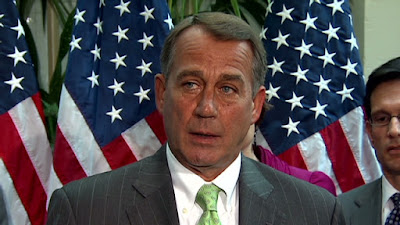 The hype surrounding the debt ceiling vote is amusing and alarming. The last time we had an apocalyptic economic crisis Rep. John Boehner wept on the House floor. Those tears were shed to support TARP. It was a handout of almost $800 billion in taxpayer dollars to recapitalize Banks that precipitated the crisis. Debt Ceilings have been raised over 70 times since the 70's. This time is somehow different. Why? There's a bipartisan consensus that something "serious" must be done(except for raising taxes on the wealthiest, increasing inheritance and investment income tax rates or cutting defense spending). When the word "serious" is used by Politicians in Washington, D.C. or corpress pundits, one must know something unpopular to the majority of people in the United States will be done. The majority will have to tighten their belts to insure wealthy treasury bondholders can collect interest.

This crisis is a case of deficit monomania. They must terrify people with economic armageddon to defend cutting Social Security and Medicare. It's the "serious" thing to do. Even President Obama is on board. He'd never dare raise taxes. Cutting defense is not on the table. Taxing investment and inheritance at the same rate as labor? NEVER!


The negotiations will be extended as close to the deadline as possible to necessitate a "serious deal". President Obama wants to do "big things". Speaker of the House Boehner wants to defend the banks and hedge funds, again. They agree more than they differ. The media coverage of the acrimony and focus on process is empty theater to persuade folks there's a real difference and, therefore, a crisis. Nonsense. The debt ceiling, like 70 times before, will be raised. I wouldn't put it past these political marionettes to go over the deadline to let the market crash and allow Wall Street pundits to "seriously" decry "the lack of confidence" and "uncertainty" that has extended the recession and high unemployment rates.

The same Soap Opera as the first TARP vote, when Boehner wept. 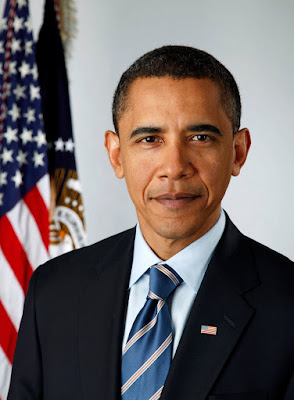 He has previously shown reluctance to raise taxes on the wealthiest, despite rhetoric. Now he is farcically attacking "loopholes" to garner more revenue. Of course the telegraphed response from Republicans is, "if you close loopholes you have to cut overall rates". This is just like the tax plan for Corporate tax evaders. Understand the message: you cannot raise taxes on the wealthiest because any tax burden on them now could hurt the robust job market. After 10 years of record low tax rates on the wealthiest-->high unemployment, go figure? The answer, of course, is less taxes! President Obama will cut Social Security, Medicare and "move to the middle"(further Right) by erasing tax loopholes while lowering overall rates for our plutocratic "job creators".

Grover Norquist is smiling. His latest pledge is sitting in the Oval Office.
Posted by Anatole David at 7:36 PM No comments: 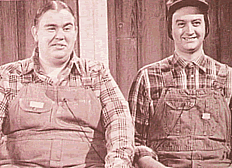 
Posted by Anatole David at 1:20 PM No comments: