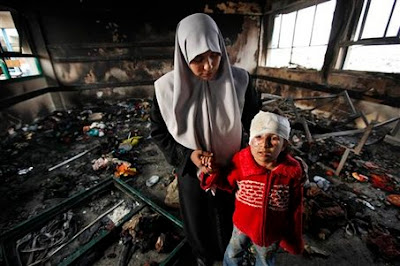 Gazans elected the HAMAS party to lead them in a
free and fair election endorsed by the US and Israel
before the results were known. After HAMAS was
elected a Blockade was implemented as Collective
Punishment by Israel to punish the people of Gaza
for their free choice. A blockade without provocation
is an act of war. It punishes people by depriving them
from exporting and importing materials which crushes
the ability to build a viable economy. It is no crime Gaza
has responded to the blockade with rocket attacks and
calls for the destruction of a state whose officers have been
candid about starving the people of Gaza to near death.
The United States has fully supported this illegal blockade
along with two brutal bombings and one invasion with
weaponry, diplomatic cover and tax dollars.

activists and out of Turkey, sailed to Gaza through

international waters and was attacked by the IDF.

Nine people were killed and one was a 19 year old

to defend itself despite the event taking place in

International Waters without any credible threat

to Israel. This controversy was buried in the United States

with zealous defense of Israeli piracy and condemnation

of the activists trying to bring food and material to people

suffering under a criminal blockade.

Today Flotilla ships are docked in the port of Athens.

One ship is manned with American activists, even an

elderly Jewish survivor of the Holocaust, who wish to

protest the criminal blockade. The US Secretary of State

the boat they are needlessly provocative and,

furthermore, Israel "has a right to defend itself".

This statement grants Israel permission to be brutal

as possible and kill as many US activists in International

Waters as they wish with impunity and that Americans

should not expect the support of their government against

American activists on the flotilla could be prosecuted in the

US if they join this flotilla for Material Supporter of


The people of Gaza are in Limbo. Leaders they freely

chose are titled terrorists. As a result, they cannot


"legally" receive humanitarian aid according to a few


Punishment is Terrorism. Pronouncements of a

state against another state waging war on its people


is not Terrorism. The state whose people are being

collectively punished, a War Crime, has a right to


defend itself against the nation enforcing the Blockade.

Posted by Anatole David at 10:45 AM No comments: 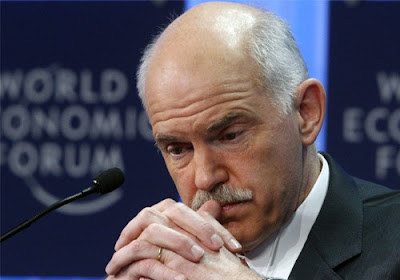 Carion: Because even a blind man can see that it's much more profitable, in this age we're living in, to be a no-good.

The Prime Minister of Greece is demanding the people of Greece suffer austerity to reward the fraudulent collusion of International Banks and Government cronies. He must insure the wealth of banks and their bondholders. Greece is for sale at pennies on the Dollar. Landmarks and islands are offered at auctions for European and US financiers. The ICC is meeting in a Hotel opposite the Parliament. In between thousands of Greek people are rioting in Syntagma Square. Quite a spatial metaphor for the Prime Minister smearing the entire nation of Greece under the rapine of International Finance. Greece relives the fate of Prometheus: A proud man bound, having his vitals pecked out greedily by bankers.

Posted by Anatole David at 10:06 PM No comments:

A Short Defense of the Young Man, LeBron James 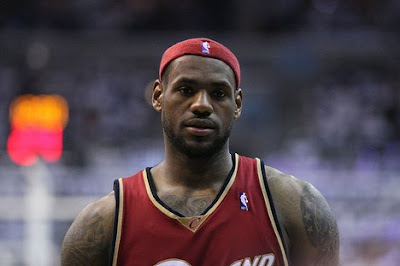 "Certainly it is a fearful business, that of having your Ableman to seek, and not knowing in what manner to proceed about it! That is the world's sad predicament in these times of ours."

-----Carlyle, "On Heroes, Hero-Worship and the Heroic in History"


A young sports star is chosen to rule a sport. At 26 years of age he is considered a failure because he hasn't reached the potential bestowed upon him by others. Be they fans, journalists or peers, the great anomaly of his accomplishments are not enough. In a team sport he is labelled the sole source of defeat for his team.

Success in American Culture is believed to be a miraculous process birthed from inspiration, hard work, and ability. The chosen individual must gain success. If not, then he's an imposter or, even worse, a slacker. Here we see the petulance of the choosers rather than the failures of the chosen. Success is not an elective meritocracy automatically crowning itself.

People grow impatient and ask the man they Crowned before any Coronation, "How dare you act like the King we have always told you you were?!"


He is young, healthy, and financially set. Nonetheless, many Americans expect him to suffer dearly. Their expectations depose the King.


Hero worship is often a cruel burden put on the chosen for something the choosers would never dare wish. LeBron James is not a victim, but millions of Americans want him to be one.
Posted by Anatole David at 12:48 AM No comments:

"Having taken advantage of them throughout the best years of their lives, society now forgets all the sleepless hours they've spent in its service, and repays them for all the vital work they've done, by letting them die in misery. What's more, the wretched earnings of the poor are daily whittled away by the rich, not only through private dishonesty, but through public legislation. As if it weren't unjust enough already that the man who contributes most to society get the least in return, they make it even worse, and then arrange for injustice to be legally described as justice.


In fact, when I consider any social system that prevails in the modern world, I can't, so help me God, see it as anything but a conspiracy of the rich to advance their own interests under the pretext of organizing society."

Birds escape
to dark arbors
above the river
taking Kings.

Fields clear and
fail to fund hopes.
Skies embrace
each alone,
humble as soil
to the plow.

Atmosphere,
a blanket we huddle under
to hush the breathless horror
of empty space.


Posted by Anatole David at 5:08 PM No comments:

Cutting the Baby in Half, Madness of the Two State Solution 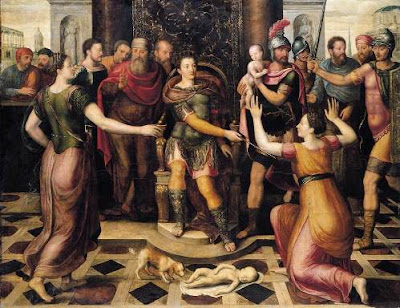 Then spake the woman whose the living child was unto the king, for her bowels yearned upon her son, and she said, O my lord, give her the living child, and in no wise slay it. But the other said, Let it be neither mine nor thine, but divide it.

Of course the two state solution offered in the Israel/Palestinian peace process has never been about equality or halving. But it, in a deeper sense, will destroy any hope of a viable state by demanding two, unequal, ethnically pure states. This spurious judgment is the truth of the entire process. When the United States, advocate for Israel and not an honest broker, leads the effort, do not expect justice or peace. Israel sits back and cares little whether peace is accomplished or not. It can always build illegal settlements and then claim them as "Demographic Conditions" or "facts on the ground" to argue for more extensive "land swaps" in later peace negotiations. Creating a weak and bifurcated Palestinian state without a right to defend itself is to posit the annihilation of any viable state for Palestinians. The two state policy takes the wisdom of King Solomon's gesture and warps it into a de facto destruction of what he, in the end, saved.

Separate but not equal was a hallmark of American segregation in the first three quarters of the 20th century. Perhaps the United States wants the same for Israel. A split, refugee laden, Palestinian state, with no right of defense or to water, will be placed next to a US taxpayer subsidized and well armed Israel. The two state solution with land swaps ensures a failed Palestinian state and ratifies ethnically cleansing Palestinians from the territories.

Posted by Anatole David at 5:42 PM No comments: