Apocryphal or not, the legend attached to
Prince Potemkin stands as an apt allusion
for current Wall Street Accounting practices.
Facades of earnings increases hide toxic
debts and decreasing demand. It's a show
for investors, not an Empress.
Posted by Anatole David at 11:31 AM 1 comment:

Herein we indulge our pleasure in refined distraction.


A list of the finest pop songs of the past 10 years.

Random, not in order of refinement.
Posted by Anatole David at 7:04 AM 3 comments:

MBS: The Harpies That Won't Go Away

"Not enough fat fingers in the world to plug this collapsing dike."
---Anonymous Quant


MBS have so fouled investment in the US to the point where banks
have no risk guarantees and, therefore, implied permission to commit fraud.
Also to the point where the Government and Media are conspicuously silent
on the total destruction of centuries of Property Law. All the risk is with
the little guy as the banks graft ponzi-chia pets onto every piece of property.
If the homeowner defaults the banks gain more. Fraud and ponzi schemes
are incentivized.

The rule of law abhors the vacuum of our present Financial System. It shakes
the dust of dollars from its sandals and leaves the small investors and homeowners
to the Harpies.

Here we witness the course of the feast where our Harpies turn
on each other--->Bank of America v. Blackrock and Pimco. Bank fraud
now steps on the toes of big investors. Congress and Obama reprise
the role of Pilate. Washing their hands while fraud runs free.
Markets will not "sort these matters out". They will simply pass the buck
to the least leveraged. Property Law is for the Banks to interpret and for the
people to dutifully observe.

Welcome to Fascism.
Posted by Anatole David at 10:34 PM 1 comment: 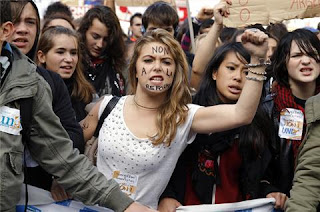 Hopefully this gets more press in the States and Americans can learn, once again from the French, how a free people resists parasitic financiers.


Some, in desperation, find comfort in solipsism.

It walks with bare feet. In the rare instance someone takes its avocations seriously and notes the consequences–well, that's violation.

Despotic utopias free from ethical consideration arise. Where the sovereign “self” shelters itself from the messiness of others.


Personal wealth is the only value. A global crime wave of war, fraud and exploitation in its name goes unpunished. Our leaders champion all means with a flood of euphemisms.
Without crime the world's financial system collapses. Daily stock tickers are the seductive tones of a Scheherazade frantically spinning tales to forestall the inevitable.

Close the atom,
look up.
There is nothing
to see in equal light.

"The era of the finite world has begun."
----Paul Valery


Capitalism is kleptocratic in its zealous defense of private property and animist faith in self-interest magically inducing free markets to provide “fair” results to all. Markets have never been an impetus for greater human liberty and justice. The US Revolution began with a Tea Party resisting taxes issued by the West India Company(a corporation licensed by the Crown). The revolution began as a revolt against an abuse of the colonial market oppressing the colonists.
Ironically this revolution culminated in a Constitution that openly endorsed slavery through denying slaves human status.


If the world does not move past profit based economy through resource extraction and care for others then the end will come sooner rather than later. Inaction will result in a greater destruction of ecology and genocide. Capitalism has reached its end: global meanness. It is no longer sustainable unless mass murder, theft, rapine and fraud are utilized. The lawlessness of powerful nations and corporations adequately display this phenomena daily.


What powerful nations title terrorism is merely resistance against their policies of mass murder, rapine and theft.
Posted by Anatole David at 7:30 AM No comments: